Colby and Friends Part I 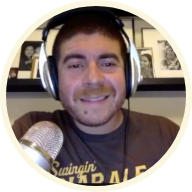 Colby and Friends Part I

Jeff sits down with Lord Chandler (yes, that is his actual title) for a three-part anniversary series to celebrate 23 years. This episode they’re joined by Chris White, President and CEO of White Labs and Tom Nickel, Owner/Brewer of O'Brien's Pub, Nickel Beer Company, and West Coast Smoke and Tap House.

Colby, Tom and Chris reflect on the early years of their friendship and chat about what makes San Diego such a strong brewing community. Flash backs to the days of sharing recipes and learning through books before the internet existed abound!

Tom and Chris delve deeper into the beginnings of their businesses, the effects of different yeasts in beers and how brewing has shaped their lives. Later, Tom uses his medieval studies degree to dissect the true meaning of Lord Chandler’s newest titles and the four talk about Colby’s career over his 23 years with Ballast Point.

Chris White:
Chris White lives in San Diego, CA, where he serves as President and CEO of White Labs Inc. Chris founded White Labs in 1995 to manufacture yeast cultures and provide fermentation services to the brewing, wine, and distilling industries. Chris has a Ph.D. in Biochemistry from the University of California San Diego and a B.S. in Biochemistry from the University of California Davis. While at Davis, Chris did a summer internship at Genentech Inc, the world's first biotechnology company. White is coauthor of Yeast: The Practical Guide to Beer Fermentation, co-designer of BrewMaster: The Craft Beer Game, and has published numerous articles on yeast, beer, and fermentation. Chris White was a lecturer in the Chemistry and Biochemistry Department at UC San Diego from 1999-2007 and is currently teaching in Brewing Certificate Program at UC San Diego Extension. Chris was awarded the 2013 Recognition award from the American Homebrewers Association.

Tom Nickel:
Tom started homebrewing at the age of 18, shopping at Home Brew Mart, before he could legally buy a beer. He ended up working there for nearly three years during the time that Ballast Point Brewing was opened. In 1997 he went to work for Pizza Port with Tomme Arthur and later become the head brewer at Oggi's Pizza where he won the 2004 World Beer Cup Small Brewing Company of the Year with Jeff Bagby. Tom bought O'Brien's from founder Jim O'Brien in 2003 and has now partnered with Tyson Blake to run the pub. Realizing a dream that began in 1995, he opened Nickel Beer Company in Julian in 2013. Tom spends most of his time in Julian enjoying life above 4000 feet. Colby's favorite fact about Tom is that he earned a degree in Medieval History from Yale University (and yes, he studied monks who made beer).

Breaking the Mold in Craft Beer